It's been a fairly slow start to the year in many ways. Children had a fairly long winter vacation after their exams which made school visits pointless for a couple of weeks and left me at home doing things like lesson planning, which as necessary as they are don't make for exciting blog posts. 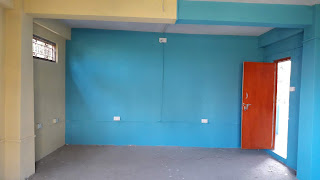 Work has been continuing at the LRC. We now have electricity, plumbing, a freshly painted building inside and out and a security gate to keep it all safe. Manisha Nepal Palpa have set up a new bank account ready to receive further funding from UK partners but a delay in getting it activated means we're currently on a slower period and can't do further work until more funds arrive. 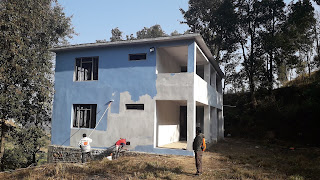 While contractors have been busy at the centre, I've been planning lessons and starting to prepare resources ready for the centre is finally open. I've now got a good bank of lessons ready that I hope will get children thinking creatively and practising skills, which are both areas that are conspicuous by their absence in most local schools. Many of the lessons come with videos, flashy PowerPoint presentations or other use of tech, but days of heavy rain and very frequent and long power cuts have reminded of the need to plan tech-free backups, which is this afternoons job! 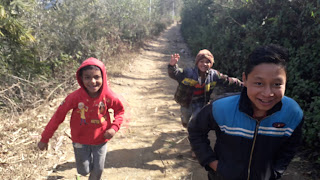 I've been continuing to run throughout the month and trying to explore new routes and places. This means I get chased and barked at by many new dogs, but also leave many locals with somewhat bemused looks on their faces as a foreigner wearing funny clothes runs through the village. Children who aren't too bemused often wave or call out a greeting or question, some of the younger ones cry when they see but every now and then I meet some kids like the ones in this photo who can't resist running with me for a little while. They're always welcome company but sometimes they do make me feel rather inadequate as I struggle uphill in my expensive trail running shoes and run up laughing effortlessly in their flip-flops! I've also been 'plogging' for the first time. Plogging combines jogging and picking up litter. Sadly, there is so much rubbish lying in the streets in Nepal I can't really run between each piece and even a full bag of rubbish barely makes a dent in the problem. But lots of people see what I am doing, and with any luck some of them will think twice about who picks it up before next casually throwing their trash on the ground. 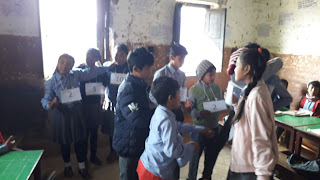 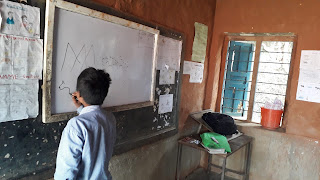 Now that children are back in school we've started making a few visits again. Yesterday, I made the early morning run to Chhap to meet Saran at his home and visit Bhagwati Lower Secondary School in the village. We had great success playing Human Calculator with class 6. The children all where different numbers and move around until I call out a number when they have to get into groups that add up to the number called. It's a great way to practice mental addition, which is another skill often lacking here. All too often in a shop I'll buy a couple of items priced at say, 40 rupees and 80 rupees and watch as the owner gets out the calculator to work out the total! This was followed by Pictionary with class 7. Some students struggled at first, producing some lovely art of the whiteboard but running down their teams time as they took too much care over producing a beautiful picture rather than drawing clues. But as students got the hang of the game, and got a little more competitive, it started to work much better and the children really enjoyed themselves.

After a quick lunch of chow-mein, we headed to nearby Kalankee Primary School. Students numbers have been declining for a while now, due to the success of family planning initiatives, and the school is expected to close after the Nepali New Year in mid-April. We spent some time with the principle discussing what will happen to the children and to the staff at that point. It seems the children and staff will be properly taken care of, but it's something we'll be keeping a close eye on. It was a pleasure to see all the students again but especially Binod. Binod is a young boy from a poor Dalit family with severe visual impairment. Over the last four years, I think we have developed something of a bond. His teacher told me that he often asks when I will visit again which is both heartwarming and heartbreaking. Heartwarming because it is very nice to be remembered and missed and to see that you made an impact with a child but heartbreaking because it suggests no one else is giving him much care and attention that he looks forward to my visits so much. We've asked the school to help us arrange a meeting with his parents so we can look at getting him to a specialist school. Hopefully, we'll be able to meet them soon and make any arrangements needed for the start of the new school year in April.

Over the next couple of weeks, hopefully, we'll get the bank account activated and pick up the pace of work at the Learning Resource Centre. I also hope to visit a few more schools, try some more new games and get some more lessons ready.
Posted by Dan at 07:22