In my last blog post, I announced that we'd formally secured a site for the new Learning Resource Centre that we are opening with the Steve Sinnott Foundation and Manisha Nepal Palpa. Since then we've been busy and have made a good start on getting it ready to open next year. We've built new steps to give easier access to the building and by the end of the day, we should have electricity and running water. Lots more to do, but a great start in a short time.


Although most of my focus has been on getting the LRC ready, I was reminded that in the UK many people are celebrating Christmas when on Christmas Day we received 8 shoe boxes crammed with stationary, hats, toys and books from Howard Junior School in Kings Lynn for their twin school, Himalaya Primary in Mahachap. Santa's sleigh obviously made it to Tansen!


Christmas is not widely celebrated in Nepal, and wasn't even a government holiday this year. However, I had a small celebration at home, eating fry momo and the best part of a Christmas Dinner, roast potatoes! We exchanged a few small gifts, mainly chocolate, which I've been happlily stuffing myself with for the last few days.

Yesterday, Himalaya Primary School celebrated its 50th Anniversary AND formally opened the new building that Manisha UK helped to fund along with the local government. I decided that it would be great to take the gifts from Howard Junior School at the same and add to the celebrations!

I decided to make the trip my final run of the year and enjoyed 12km of undulating jeep track and some hazy views of the Annapurna Mountains on the way. Miraculously, I wasn't harassed by a single dog for once! 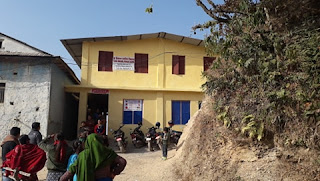 As usual at these events, we had to sit through lots of incredibly long, tedious speeches by local politicians. It never ceases to amaze me that they can continue talking for so long, even though it's very clear no one is listening as everyone has their own conversation. But eventually, the ribbon was cut on one big Christmas present, the new school building. This is such a huge improvement on the old building, where desks sat on uneven mud floors and noise carried from room to room. And most importantly, it's safe and children no longer have to study in classrooms that were officially condemned after the earthquake almost years ago! 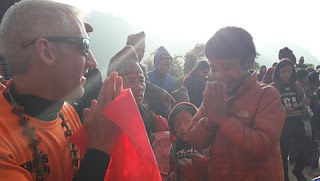 After a few more speeches, and being repeatedly promised we'd be able to distribute the gifts next, impatience got the better of me. During another long, droning speech, I started calling over children and asking them to round up everyone in their class and make a line for the lucky dip. Once others saw what was happening, it wasn't hard to get them all over to me! We'd put stationary into sets and left other prizes, such as hats, on their own so that everyone would go away with a great gift. Children in Nepal so often lose their smiles as soon as a camera is pointed at them, but I can assure you there were plenty to be seen!

That's pretty much it for 2018. 2019 promises to be a very exciting year, with the new Learning Resource Centre opening and continuing our work with the village schools. Keep checking my blog, as well as facebook.com/manishauk for the latest news.