Christmas is coming, but all the Nepali children are getting from Santa is exams!

It's been a bit of a hectic time since my last post, with plans constantly changing. I've only managed to visit two schools in that time, Bagnas and Pipaldanda.

First was Bagnas, a short walk down the road from Tansen with some great views on the way. I spent a really enjoyable few days here, working with all 5 classes and nursery. I spent most of my time working with two of the younger teachers, who both show great potential. Although (or maybe because!) neither of them have had government training they are both really receptive to new ideas and show amazing willingness to put them into practice during lessons. I watched both of them improve their questioning over the three days I was in school and both tried to bring in some role play and make the lessons more active.

Before leaving Barbara had visited Bagnas and provided some inflatable numbers for Nursery. When I arrived these were still in the staffroom, but a length of string later and the children were absolutely delighted! Eventually they calmed down enough to actually do some counting activities, focusing especially on numbers out of sequence. This is something many children in Nepal struggle with due to the constant chanting method of learning, but the bright colours and active lesson helped them to recognise the numbers and match them to quantities. 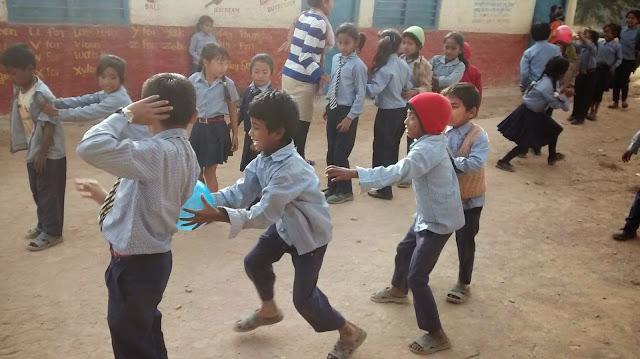 After finishing the first day with a whole school round of the Hokey Cokey, the children were quite insistent the following day that I couldn't leave until we had played a game. We had some 'under / over' balloon races which the children absolutely loved, although there were a few arguments about who got to take the balloons home!

After Bagnas I spent a day visiting a couple of other towns with Saran and soaking up some more Nepali culture. We attended a first rice day for one of his young relatives. This is the first day of a lifetime of Dal Bhat, when the child eats their first rice. It is a very big deal in Nepal with rice being such an important part of daily life and the family have a massive celebration to mark the occasion. 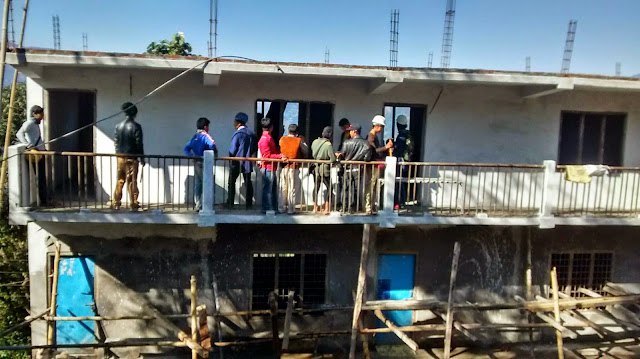 I had been intending to visit Pipaldanda straight after my trip to Mahachap, but had to postpone several times, first due to exams and then twice because the weather made the road unusable for a motorbike. On my previous visits to this school it has been all about the building work, so on this occasion I was  determined to do some teaching! It was slightly easier than I expected to get around to teaching all the students as the building work meant classes have been merged into just two different rooms. We did some work on days of the week, location as well as some numbers and stories and it was a very enjoyable morning. In the afternoon there were the discussions about the building work, which was somewhat less enjoyable as we move toward completion and the budget gets very stretched! Some difficult choices about what we can and can't afford to do had to be made, making for some tough conversations. However, work has been moving at a really good pace and carried out to a good standard. Since my last visit a massive amount of plastering has been done, safety railings installed, floors smoothed and electrical wiring was going in when we arrived. There are lots more photos available here.

While schools in England we be breaking up for Christmas this weekend, schools here are in the middle of exam season. Not exactly what most people ask Santa for, but at least most of them get a short break afterwards. I'll try to squeeze in one more visit before my own little Christmas break, but with exams and breaks in many schools this may be another plan that gets changed at the last minute!

Merry Christmas to everyone!!
Posted by Dan at 11:33